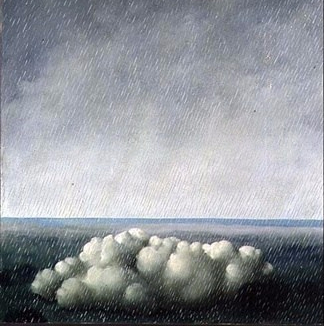 It was confusing. Trying to work out what the painting actually meant and what the artist was actually trying to portray. And then I realised that this was the point of the Margritte exhibition. Stop letting your mind be limited by what something should be.

René Magritte, Belgium’s famous surrealist artist, used art to raise awareness of our thought processes rather than just to create images. As one of the most important artists of the 20th Century, Magritte introduced a new approach to art through his unique concept of surrealism.

At a time where poets were higher than painters in the social hierachy and images were seen as less worthy than words, Magritte developed a style of painting that made you question the reality and limitations of words. Influenced by poetry, in 1927 Margritte created his first word-pictures. He labelled paintings with titles that did not have any logical connection to the image. He challenged the hierarchy, suggesting that images can be equally, if not more, powerful than words. Margritte makes us reassess the relationship between an image and the word that belongs to it, he asks us to question thinking and knowing.

This Is Not A Pipe

Well what is it then?
Margritte throws us off. The naturalistic painting is of a pipe, of course it is. But the word ‘pipe’ limits your thoughts of the painting. It can’t be smoked or stuffed, it shows something that it, in itself, is actually not- highlighting the gap between language and meaning. This is known as The Treachery of Images.

It’s just a weird shape with some bricks and a dark sky in the background- right?

How about when I tell you that ‘corps de femme’ translates to ‘female body’, ‘canon’ to ‘canon’ and ‘arbre’ to tree. Now quickly scroll up and look again.

Did you also then start to see the curved shape of a women’s body the root of a tree and a canon in the air? Me too.

The words restricted our minds, we could only see what thought it should be.

The chicken or the egg?
I am sure you have discussed what comes first several times and on each occasion come to the conclusion that the answer is as long as a piece of string.

Note the drawn back curtains, revealing not only the foreground but the broad landscape in the background, reflecting the broad topic of discussion that this question instigates. Magritte addressed and revealed  philosophical dilemmas through his art. In his painting A Variation of Sadness, he does not only highlight your thought process, but makes you consider origin.

A personal touch
Margritte illustrated some aspects of his own life through his art. The Rape, one of my favourites from the exhibition, tells the story of his mother’s death. Age 14, he saw her being pulled out of the River Sambre, naked, with her nightgown wrapped around her face after committing suicide.

The Rape reflects the state that his mother’s body was found in, her face covered and her body revealed, supressing her identity.  Margritte also portrays the identity of women in society, often seen as a sexual object – eyes for breasts, a navel for a nose and the pubic area for the mouth- as soon as you look at the woman, you see she is a faceless object, a sex object. As if we needed another reminder of the objecticiation of women, it was just last week that the Daily Mail ran their ‘legs-it’ headline.

An artist or a philospher?
Margritte demonstrated through his art that image is powerful and can influence someone just as much as the words in this blog post. He draws attention to the thought process of observing images and highlights how words can restrict this. Magritte was a surrealist artist yet how can his art be labelled as surreal when his intention was for you to see more than what you have been told. Surely this is just reality?