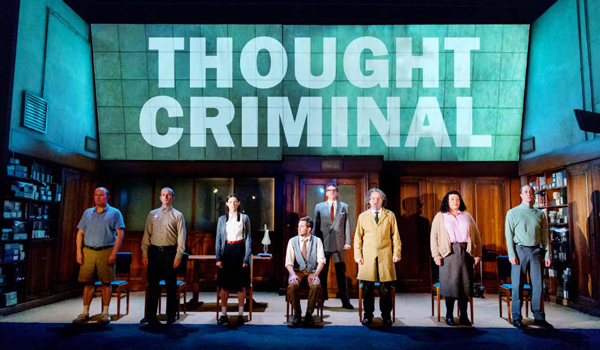 Have you ever finished something- a film, a play, a book – and you just can’t shake that eerie feeling? You have so many unanswered questions but given the chance for an answer, you simply wouldn’t know where to start.

That’s exactly how I felt throughout 1984, right from the start, even when I thought I knew exactly what was going on, and whilst I was applauding the cast for their outstanding performance. I simply couldn’t get my head around not only various aspects of the play, but also how relevant it is to today, and how much more relevant I can only predict that it will be in our futures.

1984 left me boggled, intrigued and a little bit insecure as Robert Ick and Duncan Macmillan brought George Orwell’s novel, 1984, to the stage.  They explore the contrast between what we think is just every day life and what actually goes on behind the screens we sit at every day. The Thought Police are preventing Thoughtcrime, in order to maintain the Doublethink; stopping people from believing what they have always known, but instead believing what they should know.

Winston Smith (Andrew Gower) is determined not to submit to the Newspeak being implemented by Big Brother but to stick to Oldspeak, a language he has always known. But wait, is this just in his head, or are we really all being controlled? After all, sanity is not statistical and the majority are not always right. Winston and his lover Julia (Catrin Stewart) are determined to become dedicated members of The Brotherhood, turning on the Thought Police and no longer being watched by Big Brother. Is this ever really possible though, and how far does one go before they can no longer maintain their mind over matter approach?

1984 left me on edge as I scrolled through numerous whats’app notifications whilst leaving The Playhouse Theatre. Who are my conversations really between? Just me and you? I’m not sure, but 1984 has left me thinking about who really has control over our everyday lives, and if it’s not us, then who is it?

2 thoughts on “Who really has control over our everyday lives, and if it’s not us, then who is it? 1984 @ The Playhouse Theatre”